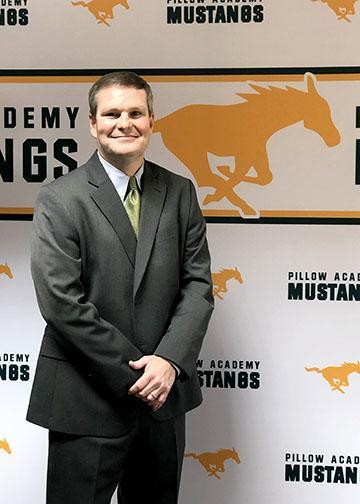 Pillow Academy is proud to announce that Coach Jim Crowder has been hired as the new Head Varsity Football Coach.

Jim Crowder is originally from Birmingham, AL where he graduated from Hoover High School and University of Alabama at Birmingham. Jim began his coaching career in Birmingham at John Carroll High School. He was also part of the coaching staffs at Homewood High School and Pinson Valley High School in Alabama before moving to Greenwood. While in Alabama Coach Crowder worked under two coaches in the Alabama High School Coaching Hall of Fame, and has coached multiple college football players, as well as two current NFL players in Zach Cunningham and Ameer Abdullah.

He moved to Greenwood to accept a coaching position at Mississippi Delta Community College. After a two year stint with MDCC, Jim was hired as an assistant football coach at Pillow Academy.  In Coach Crowder’s 15 plus years of coaching experience, he has served in the roles of Offensive Coordinator, Defensive Coordinator, and Head Football Coach.  After Coach Crowder’s first stint at Pillow Academy, he left to become the head football coach at Central Holmes Christian School in Lexington Mississippi.  In Coach Crowder’s short time as the head coach of the Trojans, he was able to lead them to back to back winning seasons for the first time in 14 seasons.  In that same time frame, Coach Crowder also led the Trojans to their highest single season win total, and their first playoff victory in many years.  After coaching in the 2019 MAIS All Star Football game, Coach Crowder decided to return home and rejoin the Mustang family.

Jim is married to the former Shea Smith, a 1995 graduate of Pillow Academy. Shea is currently teaching 5th grade at PA. His daughter is  Ann Rogers, a current 7th student at Pillow Academy.  The Crowder's reside in Greenwood, MS where they are active members of St. John’s United Methodist Church.