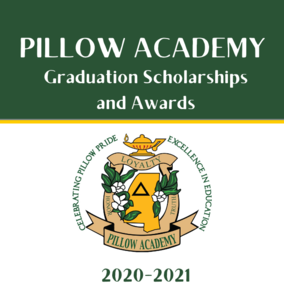 PA recognized an outstanding group of seniors at graduation.

The following awards are presented at graduation.  Each of these awards holds special meaning to Pillow Academy faculty, students and alumni.  The seniors honored by these distinctive recognitions join an outstanding list of outstanding graduates.

The Dr. Sam Brister Award is an annual memorial given by Mrs. Margaret Brister Shipley in memory of her father, the beloved Dr. Sam Brister.  His dedication and service to young people touched the lives of many that are here tonight. This award is given to a senior best exhibiting the qualities of character, integrity, scholarship, leadership, honor, service, and friendship.  This scholarship is presented to:

The Mary Lou Haley Award was established by the late Dr. and Mrs. B.B. Harper of Itta Bena to be given annually to the graduate having achieved the highest four-year average in English. This year’s award is presented to:

The Class of 2003 established a scholarship in memory of their classmate John Fair Lucas IV. John is remembered as one who began to realize the value of an education as he matured. Those who knew John remember his smile, his unfailing courtesy, and his academic and athletic prowess. The scholarship is presented annually to a senior pursuing academic excellence who exemplifies courage, integrity, and love of life. The recipient of the John Fair Lucas IV Memorial Scholarship is:

In memory of longtime Pillow supporter and girls soccer coach James H. “Bobo” Champion, Bobo’s friends and family established a scholarship to honor an outstanding senior that will attend the University of Mississippi. The scholarship is given to a student possessing character, leadership, determination, and a strong work ethic.  Bobo exemplified these characteristics and instilled them in his players both on and off the field.  This year’s scholarship is awarded to:

Congratulations to this outstanding group of seniors!