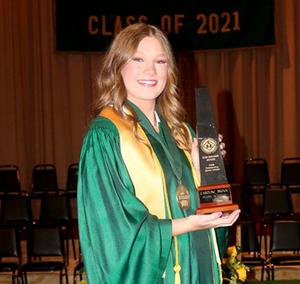 Outstanding senior, Caroline Brock, was presented with this prestigious MAIS award at graduation.

Pillow Academy is proud to announce that Caroline Brock has been named as the recipient of the MAIS Don Souder Award. This award recognizes one outstanding senior female and one outstanding senior male scholar-athlete each year. Along with the prestigious trophy, Caroline will receive a scholarship. MAIS Director of Development, Les Triplett, presented the trophy to Caroline.

As PA’s Salutatorian, Caroline graduated with a 101.30 academic average. She has taken honors classes and AP classes throughout middle and high school. She has received numerous academic awards including the Bill Davis Scholarship. She was also named to Pillow’s 2021 Hall of Fame. Caroline participated in soccer, basketball, tennis and track. She also won state titles with each of these teams. Caroline was also named to the MAIS All-Star team in soccer and basketball. She was named as PA’s Scholar Athlete and Miss Mustang Spirit.