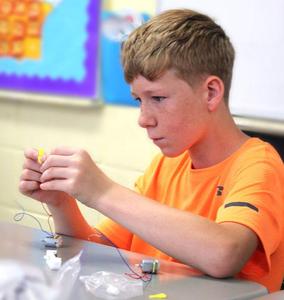 Road Rally merged into the fast lane to explore the science behind the way some animals move, like hydraulics, suction and spring-like muscles. Campers used this info to create transportation designs!

In the SolarBot class, campers saw the world through cricket’s eyes! They explored fascinating cricket characteristics. Then the campers built cricket-inspired inventions based on the amazing anatomy of a cricket.

The stories of National Inventors Hall of Fame Inductees showed the Open Mic campers how other have solved specific problems through invention. Next the campers applied the early phases of the Camp Invention Design Thinking Process™ to identify and explore problems.

Duck Chuck campers built duck launchers to test trajectory and velocity. The campers explored how velocity, angles, and trajectory work together.  Along the way, the campers discovered some fun duck facts.