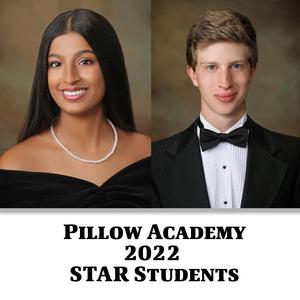 Dia Chawla and Christopher Winter have been named STAR Students for the 2021-2022 school year by the Mississippi Economic Council (MEC) M. B. Swayze Foundation.  Star Students are selected on the basis of academic excellence.  Both American College Test scores and scholastic averages are compared to determine the school’s STAR Student.  Each STAR Student is then asked to designate a STAR Teacher, the teacher who has made the greatest contribution to the student’s scholastic achievement.

One of Dia’s biggest achievements this academic year was being named as the 2022 National High School Heisman winner. This honor recognizes the most outstanding senior athlete with the highest academic standards along with community service. Dia received her award in New York in December. She claimed the title of the first-ever Delta Rice Queen. Dia is also a semifinalist for the Coca-Cola National Scholarship.

The ACT Diversity Preparation Club 2021 was founded by Dia. Many other community organizations have benefited from her time and dedication to our community. She volunteers at the Boys and Girls Club of Leflore County, Salvation Army, Beacon Harbor, Community Kitchen, MS Museum of the Delta, Greenwood Humane Society, the Greenwood-Leflore Hospital along with other community services.

Dia has not finalized her plans for college this fall. She is interested in pursuing a degree in social sciences including possibly sociology.

Mrs. Romney Brock was designated as Dia’s STAR Teacher.  Dia selected Mrs. Brock because she has had a great influence in shaping her interest in academics plus Mrs. Brock inspires all of her students to become better people. She is committed to teaching!  Mrs. Brock has been teaching English and Journalism at PA for 17 years.  Mrs. Brock said, “Dia epitomizes what a well-rounded student should be. Her talent was obvious early on, and it has been such a pleasure to witness Dia truly pursue and embrace her full potential. While she has been recognized over the years for her academic, athletic, and community service accomplishments, I am most impressed with the grace and humility with which Dia carries herself; she has a commanding presence. I look forward to watching what life has in store for this talented and intellectually gifted young lady.”

Congratulations to Dia and Mrs. Brock!

served as president of Mu Alpha Theta, which is an honorary mathematics organization.  Christopher has received numerous academic awards through the years at Pillow and he has been on the Headmaster’s List every quarter. He is a member of the Model Security Council, Science Club, Spanish Club, and the Photography Club. This year, Christopher was the co-founder of PA’s weekly newscast, “Mustang Morning”. Christopher is a member of PA’s Scholastic Shooting Team, track team, and the cross-country team. Christopher’s classmates voted him to the 2021 Homecoming Court.  Christopher was recently selected in the 2022 Who’s Who as Most Intellectual and Sophisticated Senior. He was 1 of 50 students chosen in the southeast to participate in the Lott Summer Leadership Institute for High School Students. He has a 2nd degree Black Belt in Taekwondo. Currently, Christopher is a member of the Napoleonic History Society and one year he presented a paper at the society’s conference in Montreal, Canada. With hard work, Christopher received the honor of being an Eagle Scout. He is participating in the Class of 2022’s senior play.

Besides academics and other school activities, Christopher is very active in helping the community. He is President of the Immaculate Heart of Mary Catholic Church’s Youth Organization chapter. Christopher has volunteered to help with the canned food drive, the placing of American flags in cemeteries, the Relay for Life, the MS Wildlife Extravaganza of the MS Wildlife Federation, Greenwood Interfaith Ministries Community Kitchen, student instructor at JDW Cotillion, Salvation Army’s Angel Tree along with other numerous ways benefiting Greenwood and the surrounding area.

Christopher plans to attend Notre Dame University in the fall. He will possibly major in Health/Pre-Health or a biological science field.

Mr. John Banusiewicz was designated as STAR Teacher by Christopher.  He selected Mr. Banusiewicz because he always encourages his students to achieve more than the possible – to put in the work. Christopher said Mr. Banusiewicz really cares about the students and about teaching – he devotes so much to serving the school.  “Mr. Banu” is in his 5th year at Pillow.  He said, “Christopher was in my 1st period class on my first day at Pillow.  He is sharp, well mannered, and has a genuine curiosity. He wants to know things for the sake of knowing them, not just to do well on a test. That trait will certainly carry him very far.  I am extremely proud of his growth and maturity over the past 5 year. Plus, I was extremely honored to be selected as his STAR Teacher.

Congratulations to Christopher and Mr. Banusiewicz!

Again, congratulations to Dia, Christopher, Mrs. Brock and Mr. Banusiewicz. Pillow Academy is proud of each of you.